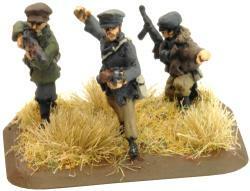 The number of Partizanskiy Brigada (Partisan Brigade) grew significantly in 1943 as the Red Army went on the offensive. Organised by the Red Army they played a significant role in 1944 disrupting German supply and communications.

Once the Red Army smashed through German Army Group Centre in July 1944 many partisan groups were swept along with the armoured breakthrough forces and were pressed into action as infantry reinforcements.

Byelorussia was the perfect place to fight an effective guerilla war. Swamps and heavily wooded areas covered most of the countryside, providing excellent hiding and ambush locations. This terrain advantage permitted the local partisans to plan and execute attacks almost with impunity deep within Nazi-occupied territory.

The Maksim HMG Team in Flames Of War

The PTRD Anti-tank Rifle in Flames Of War