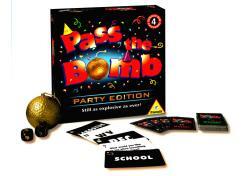 The award winning Pass the Bomb has been reducing people to trembling wrecks for over a decade and now this fiendish game has been made even more mind blowing! In this special edition, a roll of the extra category die will decide which form of torture you will be subjected to as the infernal bomb ticks away. Alternatively you can play the original Pass the Bomb or any of the four new devilish versions on their own.

For those not familiar with pass the bomb, the game is for any number of players and involves passing of a fused ticking bomb from player to player as they attempt to find a suitable word that includes the letter on the card.