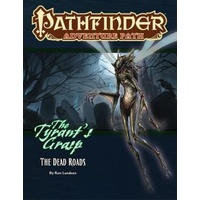 The calamitous return of the lich-king known as the Whispering Tyrant pitches the heroes into the land of the dead, but alive and intact. When the psychopomps (guides for the deceased) are at a loss to explain their unusual arrival, the heroes must navigate a treacherous landscape along the secret Dead Roads that tie the afterlife to the living world. Can the heroes survive otherworldly dangers and return to life, or will they fall to the reaper?

The Dead Roads is a Pathfinder Roleplaying Game adventure for 1st-level characters. The adventure kicks off the Tyrant’s Grasp, as players uncover a conspiracy of dark magic, the living dead, and a devastating weapon that can free an ancient abomination. A selection of new monsters, a city review of spells, magic items, and feats hailing from the afterlife, a look at the new half-dead monsters used in this Adventure Path, and an overview of the campaign arc round out this volume of the Pathfinder Adventure Path.