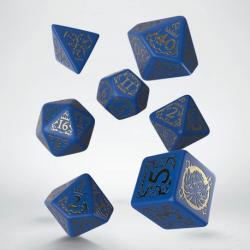 Pathfinder War for the Crown Dice (7)

It’s no longer a secret that the legendary Q works sometimes for Q WORKSHOP and he makes gadgets not only for spies. It was Q who has designed this set full of polyhedral dice, made of the high-quality plastic in the royal blue. They are adorned with golden lions and sophisticated carvings. They are elegant and outstanding, like everything Q has ever invented. Licensed by Paizo, this set of the Pathfinder War for the Crown Dice (7) was created to make changes in the history of the once prominent kingdom of Talador, thanks to successful throws. The entire Pathfinder Adventure Path: War for the Crown provides a chance to change the face of Golarion itself. There will also be new national heroes. These brave men and women may not become widely famous, but there is a glorious place for them in the shadows of the throne. Perhaps they will be secret agents of the rightful heir of Talador, the loyal servants of His or Her Majesty or the agents of change? Many hard choices await them. They will face struggles, treachery, and unique enemies. But the one who follows the path of real heroes will find fun, adventure, romance, monsters, all shades of the Golarion and shaken, not stirred drinks. The Dice are waiting for your heroes!

The Path of Secret Agent Men

The first step on this path will be made in Crownfall, where the sky itself will fall, the king will die and all this during a delightful party. Then our heroes will face the Songbird, Scion, Saboteur, and all will have the perfect view to the mass murder of the first row of Taladore Nobles. Then The Twilight Child will come and light the fire of war on Her Majesty secret service. Shortly thereafter, everyone will meet the men with Lion’s Blades and death will take its toll in City in the Lion’s Eye. The golden fingers of The Reaper’s Right Hand will be the sign of the penultimate chapter and the beginning of the end. In the grand finale, The Six-Legend Soul will announce that the Empire is not enough, so live and let die old Talador! Long live the new heroes and new advisers, Hail Your Heroes! Just remember that you only throw twice (if you have merciful GM).