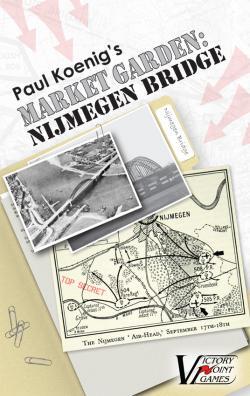 Paul Koenig’s Market-Garden is a series of small-format, competitive introductory-level wargames covering the critical first three days of Operation Market-Garden, where the Allies attempted to seize a series of bridges in Holland and end WWII before Christmas. Each game in the series covers a separate bridge: Arnhem, Eindhoven, and Nijmegen. As a player, you must command your German or Allied forces so as to capture key objectives on the board while keeping your casualties down (and your opponent’s casualties up).

With plenty of decision making and Optional Rules to extend gameplay and realism, the Allied advance into Germany hangs in the balance at Nijmegen Bridge!