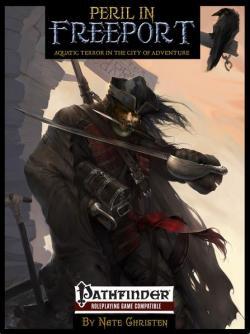 Something evil lurks in the waters off Freeport!


A tidal wave and the ravings of a shipwrecked halfling lead your heroes to discover a conspiracy to sink ships headed in and out of Freeport, a black market in stolen cargo, a slaver's hideout, a Great Hunt called by the Captain's Council, and a final showdown against a horrific plan to release an abyss-spawned sea monster from its centuries-old prison!

Peril In Freeport is a Pathfinder adventure release set in one of the most beloved fantasy cities in gaming: Green Ronin's Freeport, City of Adventure!