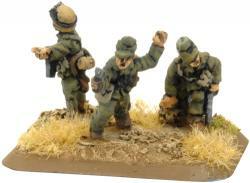 
The pioneers of the Deutsche Afrikakorps are specialist assault engineers, who would prove particularly critical in the 1941 Tobruk battles. Here the Tommies were able to use minefields, miles of barbed wire and the fortifications previously built by the Italians to protect the vital port.

To defeat these elements and to assist the infantry in attacking the strongpoints that surrounded Tobruk, pioneers were needed.

The Pioneer Platoon (Afrika) in Flames Of War