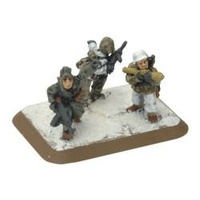 The pioneers create pathways for the army to move through by blowing holes in the enemy fortified line or using simple picks and shovels to clear and create obstacles. Either way, the Pioneers continue the tradition of leading assaults with flame-throwers and enough explosives to reduce any fortress to rubble.

A Volksgrenadierdivision has its own pioneers for laying and clearing mines and other obstacles. They are also armed with explosive charges and flame-throwers, which are ideal in assaults against fortified positions and bunkers.

The platoon’s supply wagon gives them enough materials to construct defences such as barbed wire entanglements or deadly minefields. Use these to confound the enemy’s attacks so that your troops can regain the initiative and carry on with the blitzkrieg.