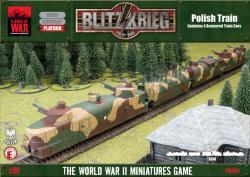 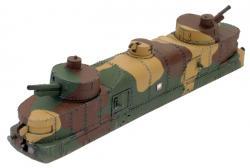 The history of Polish armoured trains started shortly after Poland gained independence in 1918. They were one of the most important weapons in the war against Bolsheviks in 1919 and 1920, and the other conflicts that shaped the borders of Poland. Dozens of improvised armoured trains fought between 1918 and 1921. After operations ceased in 1921, only the dozen most advanced were left in service.

In September 1939 the Polish Army had two armoured train battalions in service:

On the day of the German invasion Nr. 53 assisted the Wołyńska Brygada Kawalerii (Volynian Cavalry Brigade) in stopping the advance of the German 4th Panzer Division at
Mokra. On the following day the trains withdrew towards Warsaw engaging tanks of the 1st Panzer Division.

Two weeks later both trains fought in the defence of the fortress city of Brześć, holding off the 10th Panzer Division for three days. The train escaped the fall of the fortress, only to be finally captured by the Red Army in Lvov.