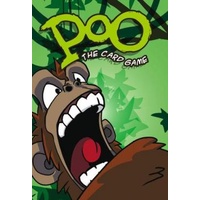 It's been a tough day in the monkey cage and something in the food tonight wasn't quite right. In monkey world, there's only one thing that can be done about it - fling poo!

Poo is a fast-paced card game for two to eight players, requiring anywhere from five to fifteen minutes to play. It's fast and furious - something you can play while waiting in line or on lunch break.

Each player takes on the role of a monkey. You fling poo and mess with each other until only one monkey is left standing. That monkey, of course, is the cleanest one. Each turn, every player gets to draw and play a card, usually either to fling poo at another player or to clean himself off. Out of turn, each player gets to play cards to defend himself or foil other players' poo flinging.

With cards like these, you can't lose!
Not in the Face!
King-Kong Poo
Grandpa Poo
The Big One
Montezuma's Revenge
Buddy's Face
Shimmy-Shimmy Shake
Blaze of Glory
The Golden Banana

Take It Like A Monkey!
The top five questions about Poo:

1. Can you play with only two players?
Technically, Poo is a game for two to eight players. It can easily be played with only two players. However, since Poo utilizes mechanics that redirect things to the players on a person's left or right, four or more players are optimal to take full advantage of some of the card effects.

2. Ugh! How could you make a game about this?
We don't actually show any poo. This game is designed to be cute and fun, something you can play with your mother (which we have). The cartoon-style shows only monkeys' reactions to the poo being flung at them, or something equally as humorous.

3. When is Poo coming out?
Depends. When did you eat last? The jokes really do write themselves, folks.
Seriously - November/December 2009. In time for the holidays.

4. Where did you come up with the idea for this game?
Years and years of personal research. We're method.

5. Isn't this created by the guys that made CthulhuTech?
Yup. Try being that dark all the time and see where it gets you. Usually a quiet room with crayons and colourful little pills that make the world filled with candy and shiny rainbows.