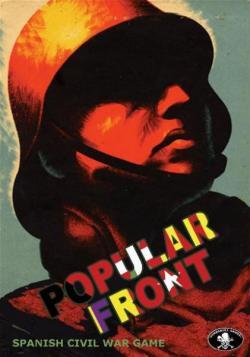 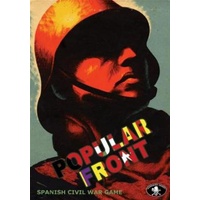 "Over all of Spain, the sky is clear.”

On July 17, 1936, this phrase was broadcast throughout Spain, signaling the beginning of the Spanish Civil War, one of the bloodiest civil wars of the modern era, and what could be considered the beginning of World War II. Within a day, one third of Spain was under the control of Nationalist forces attempting to stage a military coup. Over the next three years, what began as a military rebellion evolved into the physical battle lines of the much larger ideological conflict spreading across Europe between Fascism and Communism.

Popular Front recreates this conflict in 90-minute strategy game form, leading players to compete against their ideological counterparts not only for military positioning, but for political victory. Players must be concerned about the position of their forces on the board, but the composition of a player's hand will affect their success in combat more often than not.

Plays with two, four, or six players split into two teams. Players each have an identical 20-card deck (with unique, original propaganda posters actually used in the war) that results in the use of your cards being more important than the luck of the draw. Strategic thinking, trickery, teamwork, and a dash of courage are what lead to victory in Popular Front.