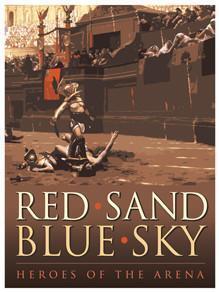 Just saying the word conjures up visions of vicious combat between desperate men who fought to the death for the amusement of the crowd. These games of death, originally started to honor the dead (the munus), began in 264 BC and continued through the Roman Empire in one form or another for over 900 years until abolished in 681 AD. Now with Red Sands Blue Sky - Heroes of the Arena you can recreate the glory and splendor of these games on three levels.

As a gladiator you fight your way through the Empire in hopes of reaching the Colosseum in Rome and perhaps the ultimate glory, the wooden sword of freedom, the rudis.

Or perhaps you would rather be a lanista, the trainer or manager of gladiators forming your own troupe or familia gladiatoria..

And the third way to play Red Sand Blue Sky - Heroes of the Arena is as the owner of a ludus or gladiator school seeking to reach the ultimate honor, a school in Rome herself.

Red Sand Blue Sky - Heroes of the Arena gives you everything you need to do this and much more. But perhaps the best thing about the game is that it can be played solo against the game mechanics, cooperatively with all players on the same side, or competitively, head to head against your friends.