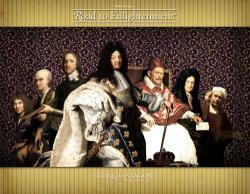 Road to Enlightenment gives you control of the great leaders, minds and personalities from the Age of Enlightenment in an epic struggle to become the most admired and powerful nation in Europe. Your nation will strive to expand on the continent and in overseas colonies, become a leader in culture and innovation, and contribute to the Europe-wide struggle of Catholicism's struggle for supremacy over other faiths.

134 luminaries from European history are brought to life with ratings in seven different categories: Politics, Military, Religion, Ideas, Science, Art and Wealth. Each person also has a unique Action, Enhancement or Response that captures an important contribution they made during their life for your benefit. These famous people work on behalf of your leader and nation.

Your leader has unique strengths, weaknesses and abilities creating an asymmetrical game that makes you consider the real-life challenges they faced. Based on the success and creations of your people, your monarch attempts to maximize your nation's influence and prestige in the view of the world and put you first on the Road to Enlightenment.

The objective is to use Military to expand, Religion and Politics to steer The Battle for Christendom toward your preferred religion, Ideas and Science to drive Innovation, and Art and Wealth to expand your culture. Whichever leader executes the best combination of influence in these myriad ways will be viewed as the most prestigious monarch, and thus the winner.

After a quick setup each player selects from one of the available leaders, formulates a basic strategy, and draws their initial luminaries. Players then plan ahead for their two actions each turn, secretly committing cards for what they are going to do. One by one each player reveals and executes their first action, then when their turn comes around again the second. Each action brings a cornucopia of possibilities: will you choose to build up your military and project force? Use wealth to build up a treasury for maximum flexibility? Attempt to move up the various influence tracks in order to distinguish yourself? Every popular player strategy - the rush, the boom and the turtle - are supported by the system and its unique "king of the hill" mechanisms.

Turn after turn, you add and lose luminaries, shifting your tactics to adjust to the broader European situation. Winning demands interacting, negotiating and actively playing with your opponents. Trying to employ a "multi-player solitaire" strategy will almost certainly let a more cooperatively-minded player climb to the top of the heap. So even if you want to be a "builder" not a "fighter", don't lose sight of how other players are doing and use your negotiation skills to undermine them!

As the game concludes the playerwith the most prestige wins, having their nation furthest on the Road to Enlightenment. For everyone else, it's simply time to start another game!