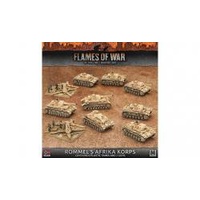 Under the leadership of Generalfeldmarschall Erwin Rommel, the Deutsches Afrika Korps (or DAK) trounced the British Eighth Army time and time again. The ‘Desert Fox’, as he became known, gained an almost mythical status as a military genius to both friend and foe alike. Rommel owed his success to a combination of his own experience and hard-driving nature, and the superb troops he commanded. Serving as a Leutnant in the First World War, Rommel showed an aggressive style that led to spectacular victories over forces much stronger than his own.