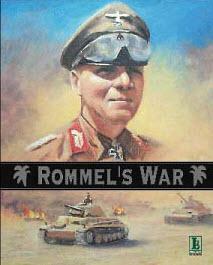 With a fanfare of trumpets and trucks loaded with marble monuments to mark the triumphal progress of the Italian Army, Mussolini gambles on a high scale as his troops march into Egypt. Envious of the success of German arms as they achieved one conquest after another marching across Europe, the Italian Dictator wanted to put on his own show. And what a show it was to be.

The British army launched their attack to repulse the Italians on the 9th of December and by 12th, the Italians were routed. In two short months, the British captured Bardia and Tobruk, over 130,000 prisoners, 400 tanks and 1,000 guns little realizing they had sown the future seeds of trouble in Africa.

In February of 1942, General Erwin Rommel arrives in North Africa and takes command of the newly formed Afrika Korps. Rommel, the master of audacity and deception did not waste time and launched his first attack against El Aghelila on the 24th of March. And now, it was the British Army's turn to retreat! In the coming months, news of the success of the Desert Fox spread across the world as he threatened to push the British out of Africa. Battles for cities few had ever heard of have now become news worthy places, including: Benghazi, Gazala, Tobruk, Sidi Rezegh, Bardia, Mersa Matruh and El Alamein!

This was Rommel's War.

Noted game designer and industry luminary, Vance von Borries, first published Rommel's War in 1985. They recommissioned the game to be completely updated and redesigned, including new Order of Battles, a new and vastly improved map and an entirely new, modern set of rules that make Rommel's War a brand new offering.

Rommel's War takes you the beginning of the hostilities in North Africa, when the Italians first launched their attack into Egypt in September of 1940 through to the massive turn of the tide as Field Marshall Montgomery's 8th Army stems the tide and reverses the fortunes of the Afrika Korps as the Americans land behind them in Algeria at the end of 1942. This is one of the finest games published on the topic, with a stunning map, manageable counter density, gorgeous graphics and concisely written rules to allow you to play any one of the six scenario packages in the game, including the campaign game in a one-day session. If you are a fan of the African campaign, this is a must have game for your collection.