Runebound: Fall of the Dark Star 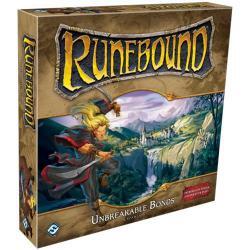 Like other Scenario Packs for Runebound, Fall of the Dark Star introduces an entirely new scenario to your games of Runebound, offering a substantially different experience with thirty new adventure cards: ten for each of the three archetypes.  You may battle a Starborn Specter or travel to the Howling Valley in search of a fallen dark shard, but no matter where you go a new deck of story cards continues to raise the stakes as you search for the dark shards that fall from the heavens.  Finally, you’ll find an entirely new hero, Zyla, a being from the Aenlong realm whose otherworldly powers have led her to become a hero of Terrinoth.

• A new Scenario Pack for Runebound   • Contains a new scenario that offers an entirely different game experience, pitting all heroes against each other   • Thirty new adventure cards and a new ten-card story deck lends this scenario a unique flavor   • A brand-new deck of corruption cards forces the heroes to contend with the dark star shards raining down on  Terrinoth   • Offers a new hero—Zyla—who gives you an entirely new way to experience the game