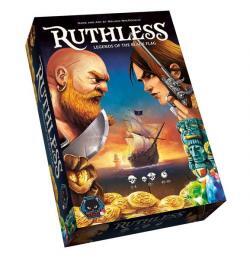 Ruthless is a pirate-themed game in which players gather their crew and fight with their opponents.

The primary mechanic of Ruthless is deck building. Every turn a player must play a card or set of cards from their hand after which they may buy new cards for their deck. The deck consists of pirate cards, which allow the player to attack an opponent, draw more cards and perform many more profitable actions, and treasure cards which allow the player to buy more and better pirates. Treasure cards can be discarded immediately to acquire gold when needed or added to the deck to benefit repeatedly from their bonus. New crew members are laid out in front of the players and their effects are used at the moment of acquisition.

At the end of each round players form poker combinations with the cards in front of them and compare the strength of their crews in play. The player with the strongest crew wins the battle and gains most points.

After five or six rounds (depending on player count) the game is over and the player with most points wins.