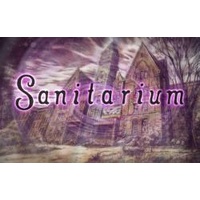 You awaken in a cold, creepy, dark building. Unnerving sounds and sights are all around you, and a draft whistles through the clattering windows. Others are here. Will you help them escape?

You have no idea how you got here, you just want to get out...

Sanitarium is a horror escape game, featuring cooperative, competitive, and solitaire rule sets. Find your Safe Things and escape... before it's too late...

Sanitarium plays in 30-45 minutes, and is for 1 to 4 players.  You can play competitively, cooperatively, or solitaire.  Go nuts!  Wait, don't do that...you'll lose.

To start the game, each player is secretly dealt a number of Safe Things, which represent the items they'll need to regain their sanity and escape this terrible, terrible place.  The Sanitarium is represented by a series of hallways and rooms.  Each card's back doubles as a unexplored hallway:

As you explore, you'll find rooms.  Rooms grant you safety from the monsters that may be roaming the halls, and you'll need to be in a room with your Safe Things to finally escape.  The rest of the cards are of three types:

As you move about, you can spend action points to peek at the card you're standing on by searching the room, and potentially take it.  But of course, the shadows hide terrible things, and monsters will be roving the halls as well. Each player will both take actions moving and exploring and also move one of the monsters, potentially attacking another player (In co-operative and solitaire play, the monsters move on their own).  Of course, the monster could just be a figment of their imagination, so nothing at all may happen...