Settlers of Catan - Frenemies of Catan 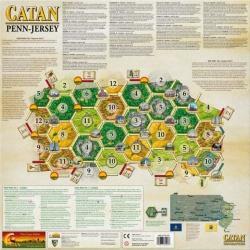 Hark, friend! Let us… help… each other. We live in a time of altruism on Catan. We give away resources to help lagging players. We move the robber to isolated locations to ensure the safety of our fellows. We even go out of our way to connect our roads with our neighbors’ networks. Has everyone gone nuts?

Ah! Thanks to their beneficence, Catan’s guilds reward such noble-minded behavior by handing out “Favor Tokens” (FTs). Each guild helps us in different ways: granting us roads, development cards, random resources, preferential trades, or even Victory Points.

Everyone is just in it for themselves. There is an ulterior motive for everything. In fact, sometimes you can “help a friend” while making things far worse for them.

Sigh… If goodwill really exists… it’s not part of this scenario.