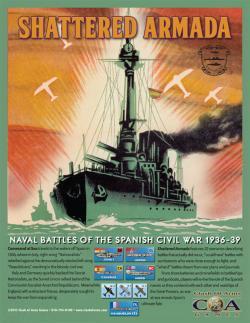 Command at Sea travels to the waters off Spain in 1936, where in July, right-wing "Nationalists" rebelled against the democratically elected left-wing "Republicans", resulting in the bloody civil war.

Italy and Germany quickly backed the Facist Nationalists, as the Soviet Union rallied behnd the Communist-Socialist-Anarchist Republicans. Meanwhile England, with a reluctant France, desperately sought to keep the war from expanding.

Shattered Armada features 22 scenarios describing battles that actually did occur, "could have" battles with combatants who were close enough to fight, and "what if" battles drawn from war plans and journals.

From short batteries and minefields to battleships and gunboats, players will relive the role of the Spanish navies as they contend with each other and warships of the Great Powers, as war at sea reveals Spain's ultimate fate.