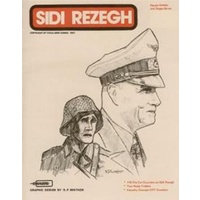 Published in ziplocked form by Excalibre Games in 1977 as part of their "Panzer Battles and Sieges series," this game covers the British army's "Operation Crusader," begun in North Africa in November 1941.

The plan called for the break out of the their besieged Tobruk garrison in order to link up with other advancing British units driving from the Egyptian border toward that Libyan port. The German commander, Erwin Rommel (the famous "Desert Fox" of the "Africa Corps") for his part hoped to capture Tobruk before the British could make their move. This two-player game comes with 110 die-cut half-inch unit counters, a 17x11 inch two-color map sheet, two order of battle charts, one four-page series rules folder, one four-page special rules folder, and all the charts and tables needed to play. The game is simple without being simplistic, and will be easy for even those entirely new to the hobby to get into. It is loaded with action and covers an unusual historical topic, and is a hard to find classic from a long-gone era of the wargaming hobby.