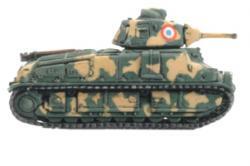 The Somua S-35 gave excellent service to the French army as a well-armoured medium cavalry tank. The S-35 out performed nearly everything it faced in combat. It was relatively fast, had a powerful gun and was protected by 47mm of front armour.

Over 430 of the 19-ton Somuas were built from 1936-1940.  The tank saw service on most of the major French battlefields of 1940. A few would even crop up later in German service in Normandy as well as in various Free French formations serving well into 1945.

The Somua S-35 (pronounced saw-mwa) is considered by many to be the premier medium tank of the thirties with a classic combination of speed, range, armament and armour.

As a result of the battles at Hannut and Gembloux where Somua tanks inflicted heavy losses on German tanks, Panzer units were given orders to take on Hotchkiss tanks but to avoid long-range engagements with the dangerous S-35.