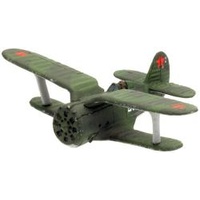 The I-153 was developed as a direct result of the combat experiences during the Spanish Civil War. Reports were flooding in that the Polikarpov I-15 was being outclassed by the Italian forces flying the Fiat CR.32 in support of the Nationalist cause.

Since Soviet doctrine was based on a combination of high performance monoplanes and more agile biplanes; the lessons learnt in Spain were not lost. The Polikarpov design bureau were soon asked to design a new biplane fighter.

The new design was heavily based on the I-15bis but featured a stronger airframe and was fitted with a new retractable undercarriage in order to reduce drag. The upper wing design was borrowed from the I-15 while the aerofoil was taken from the I-15bis.

The armament was also upgraded; from four 7.62mm PV-1 machine-guns that were fitted to the I-15bis to four ShKAS machine-guns. While both weapons fired the same calibre bullet; the ShKAS had more than double the rate of fire.

First taking to the air in August 1938, the I-153 and was able to thoroughly outperform the I-15bis during test flights. Its baptism of fire came less than a year later; proving it could hold its own against the Japanese Type 97 fighter (Nakajima Ki-27) Nate during the Battle of Khalkin Gol in 1939.

However, by the time of the German invasion of the Soviet Union in June 1941 the Soviet Air Force severely lagged behind the rest of the world in aircraft technology as a direct result of Stalin’s purges during the 1930s. Consequently, the Luftwaffe was able to easier overpower the Soviet Air Force which still contained a large portion of obsolete designs such as the I-153.