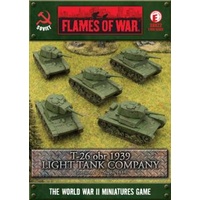 The first thing required by the theorists was a breakthrough of the enemy front line. The idea was that massed light tanks would advance with the infantry, destroying enemy machine-gun nests and pinning down the enemy riflemen, allowing the infantry to capture the enemy trenches. This required a relatively cheap and simple design that could be fielded in large numbers. Fortunately, the Vickers-Armstrong company were offering exactly such a design with their 6-ton Type E tank.

The Red Army bought some samples from Vickers and then proceeded to produce an unlicensed copy called the T-26. The first production model of 1932 (obr 1932) was a twin-turreted design with two side-by-side machine-gun turrets. While this seemed like a good idea at the time as it appeared to give the tank twice as much firepower, it quickly became obvious that the difficulties in coordinating two turrets and a driver actually reduced its effectiveness.

The final design of the T-26 light tank was the T-26 obr 1939. This introduced an improved turret armed with the excellent 45mm obr 1938 gun. It supported infantry on the attack where its gun could knock out enemy guns, infantry, and tanks. The T-26 obr 1939 saw service with the Red Army as late as 1942.