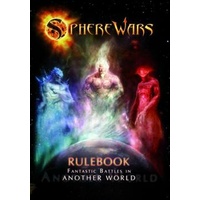 Welcome to SphereWars, another world

Discover a dynamic skirmish game of 28mm miniatures in which You will Never Play Alone.

Go deep in a whole new concept of fantasy where every race, created by different Gods, is forging its own destiny.

Four are the gods that make up the celestial pantheon, ruling over the spheres; four like the natural elements shaping the planets. These brothers are in perpetual confrontation, it seems impossible for one of them to overcome the others except for a while.

The four gods were made of the four primary elements, but only one of those stood out in each of them, and this shaped their particular personalities. They are in continuous fight to show who is the mightiest among them, but none of them could exist without the other three. Should one of them be destroyed –if a god can ever be destroyed–, all of them would probably disappear, along with the entire universe.

Kurgan, the God of Ice, who also shows predilection for warfare, battles and martial harshness. He instils a high passion for combat in his creations and shapes mighty, fierce beings who frequently prove themselves to be true predators.
His children in Saphir are the Scions of Kurgan, both soimi and regor.

Kazag, God of Incineration, he seeks for his creations to prevail by means of overwhelming numerical superiority, defeating their rivals like a swarm. His children, the Packs of Urueh, battle’s main law is simple: Why fight enemies when you can just... incinerate them?

Malesur, God of Wind, does not feel an excessive passion for battle or destruction, he prefers to obtain mastery over his brothers by means of the evolution of his creatures. Malesur created the humans that conform the Alliance. When they forgot their god, he favoured a few chosen and granted each of them the ability to take on the physical aspect of powerful beasts, confering them extraordinary power and strength in the process, these are the Adepts of Malesur.

Mohed, the God of Sand and Rock, who has a penchant to use these elements to shape his creations. Like Kurgan, Mohed takes great pleasure in duels and battles. More reserved than his brothers, Mohed only acts when the circumstances demand it and his current plans in Saphir remain unknown.

Salssa’el is the Goddess of Life. She is a wise and prudent being who prefers to keep apart from what she considers silly sibling rivalries. She is, therefore, the only one between the gods who has not joined the game of war raging among the spheres, and who rejects the death each and all of her four brothers cause with their endless battle, despising all of them alike.
She insufflates the breath of life upon her brothers' creations. This is probably the reason why she despises how carelessly they reap hundreds of lives.
She had a key role in the creation of the Newborns race, when she allowed a human to discover the power of the Quitessence. Although while her intentions were pure, her actions brought a new misfortune and evolved into new battles for power between the factions in Saphir.