The Star Trek: Ascendancy – Borg Play Mat is 3' x 3' playing surface for games in the Final Frontier that provides a natural boundary for your sprawling galactic map.

This galactic game surface has been assimilated by the Borg, and features Borg accents along the game edges as well as a central green star to mark the position of the Borg Transwarp Hub System Disc.

This assimilated version of the play mat will only be produced in limited quantities. Grab one while stocks last 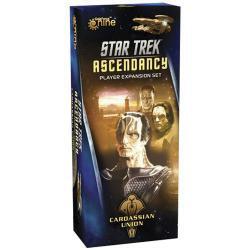