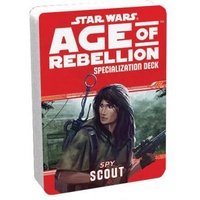 The Rebellion’s Scouts are experts at slipping into and out of systems unnoticed to provide the Alliance the information it needs to commit its forces to action. They determine where the enemy is, what the enemy is doing, and what the conditions of the area of operations are like. Keep your eyes open and get closer to the action with the Spy Scout Specialization Deck.

This is not a standalone product. A copy of the Star Wars: Age of Rebellion Core Rulebook is required to play.