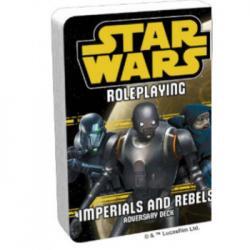 There are very few places in the galaxy where one might conceivably escape the ongoing conflicts of the Galactic Civil War. The Empire holds hundreds of systems and planets firmly under its control, and there's always a chance you'll run into one or members of the Rebel Alliance anytime you travel to one of the worlds upon which the Empire doesn't have quite as firm a grip. As a result, it's possible to run into characters from the different sides of the conflict no matter where you go, and you can give these characters immediate color and personality with the Imperials & Rebels II Adversary Deck. With NPCs ranging from Imperial bureaucrats and assassins to Mon Calamari Commanders and Rebel Quartermasters, this Adversary Deck can add color to all manner of different situations you might find in your Star WarsÂ® Roleplaying campaign, not just combat encounters. All the pertinent for each NPC is printed on its card, along with a short description and art piece. This is not a standalone product. A copy of the Star Wars: Edge of the Empire Core Rulebook, Star Wars: Age of Rebellion Core Rulebook, or Star Wars: Force and Destiny Core Rulebook is required to play.