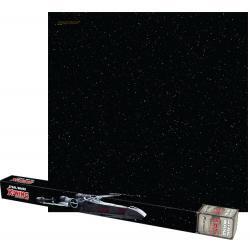 Take your battles to the stars with X-Wing Playmats! Each X-Wing Playmat is an easily portable, tournament legal, 3’ by 3’ neoprene playmat with a slip-resistant bottom. You can fight among the stars with the Starfield Playmat, or recreate space battles from the movies atop the Death Star Assault Playmat.

Whether you field a squadron for the Rebel Alliance, the Imperial Navy, or the galaxy’s Scum and Villainy, your battles will gain a renewed vibrance when played over the cinematic settings of your X-Wing Playmats.

Take your space battles to Yavin 4 by playing on the Death Star Assault Playmat. This playmat displays the Death Star as it orbits above Yavin 4, allowing you to set your dogfights in the climatic ending of Star Wars: A New Hope. Whether you seek to break the Empire’s power, or establish dominion over the galaxy, this playmat will serve you well.