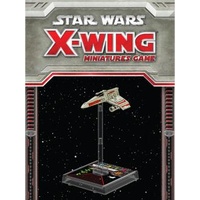 The E-wing was designed to match or exceed the performance of the X-wing in every respect, and the E-Wing Expansion Pack for X-Wing introduces a starfighter that combines the best of the X-wing’s firepower and durability with the A-wing’s speed and maneuverability. With an E-wing miniature sculpted faithfully at 1/270 scale, four ship cards, five upgrade cards, maneuver dial, and tokens, this expansion comes with everything you need to pursue entirely new tactics in your X-Wing battles!