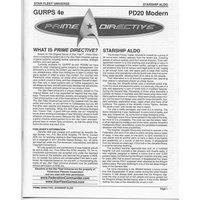 STARSHIP ALDO: Your swashbuckling team of ex-military types are trying to make a living in the wreckage of the General War, always on the look out for a score big enough for you to retire. You find some wreckage, which turns out to be the top four decks of some kind of freighter. You can see burned lettering on the side, but can read only the letters "aldo". So, is this the cargo ship Geraldo Rivera, the armed auxiliary warship Aguinaldo, or the luxury liner Waldorf Astoria, all of which were lost in this area during the General War? This is a 16-page adventure for Prime Directive with weapons, characters for PD20M and GURPS plus deck plans of the Aldo ... well, of what's left of the Aldo.