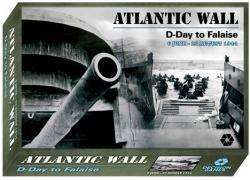 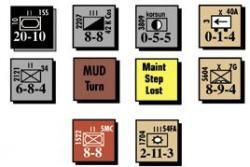 STORM OF STEEL (SoS) is a complete simulation of World War I. Three maps cover Europe from the Pyrenees to the Urals along with the Middle East. Fighting rages from St. Petersburg to Verdun to Baghdad and beyond. The maps can be combined for one grand campaign game, or they can be used separately for theater-level campaigns of the Eastern front, Western front and Middle East fronts. Nearly two dozen scenarios allow players to focus on one year and one front, one year on all fronts, start a campaign game from the beginning of any year, play the Eastern front for the entire war, play an alternative history 1919 scenario, or play a Grand Campaign of the entire war. Turns are quarterly, with all units able to move and fight in at least one impulse per turn. Campaign Cards simulate the designation of objectives and logistical preparations, and provide additional impulses and potential combat bonuses to recreate the intense offensives of the war. Units represent land, naval and air forces. Ground forces are portrayed at corps level. Each corps is rated for the number of divisions it includes; so players can concentrate for the offensive or disperse for the defense. Corps types include infantry, shock troops, mountain infantry and cavalry.
There are also specialized armored car and tank brigades, as well as tank corps for 1919, plus the planned-for American airborne division. Each country has its own unique order of battle. For example, the Austro-Hungarians have mountain corps, and there are also additional units representing Bolshevik and independent nationalist forces. Naval units are at the squadron level for capital ships, and flotillas for cruisers and destroyers. Surface engagements, naval bombardment, even amphibious assaults are possible. Naval combat requires opposing fleets to acquire each other and then engage in gunnery. Light fleet units are invaluable for recon and screening, while battleship and battlecruiser squadrons provide killing power. The British Royal Navy is able to impose a blockade that Germany may try to break.
There is also commerce raiding, including unrestricted submarine warfare, for attacks on merchant shipping, as well as convoy escorts for defense. Air warfare is represented by strategic and tactical wings. A unique feature of the game allows for improving aerial warfare capabilities by increasing air doctrine levels. As air doctrine improves, players can employ increasingly sophisticated aerial missions including interception, aerial supply and para-drops. Psychological warfare is an important element in trying to maintain the morale of friendly forces while undermining the enemy’s morale. Land combat uses three different combat results tables to model variable tactics. Assault combat is bloody and often results in exchanges. Probes are used to try to push the enemy back while minimizing losses. Tank and shock troop units can use infiltration to attempt breakthroughs.
Mobilization and production give players the capability to produce different forces. Several types of infantry, as well as other unit types and enhancements, allow players to trade quantity for quality or build specialized forces for particular objectives. Industrial output varies as the home front reacts to the need for greater force, but eventually collapses if morale and other factors overtake efforts to sustain the economy. SoS uses cards to generate major operations. Campaign cards give players the opportunity to recreate the major campaigns of the war or refocus those efforts in different ways in an attempt to change the course of the war. Players plan their campaigns, then mobilize and deploy their forces to maximize their campaign card advantages to achieve their objectives. While players can potentially play a campaign card on every front, they will more likely focus their efforts on one front, trying to obtain a knock-out against one country while holding back other countries on other fronts. Other cards provide for improvements in weapons and tactics, such as Air Doctrine, Poison Gas and Tank Brigades. Yet other cards provide for other events and contingencies such as conducting military campaigns in the colonies, reacting to the enemy efforts on otherwise quiet fronts, influencing neutrals to join the war, and attempting to convince enemy countries to quit the war. Some of the cards bring influential personalities into the conflict, such as Hindenburg, Brusilov, Lawrence of Arabia, Foch and Pershing.
SoS is the comprehensive simulation of World War I. All the elements of the war are simulated, yet the rules are straight-forward and easy to understand. The main rule book is only 32 pages, including optional rules. A supplemental scenario book explains set-ups and special rules. A campaign game lasts 18 turns. It can be played by two players and also makes a great weekend game for four to six. No matter the number of players or the time available, SoS provides an opportunity to study individual fronts and years as well as the big picture. It allows players to examine the interaction of military, economic and political elements and events. You can recreate the sweeping campaigns in the east and the Middle East. You can try alternative strategies to break the trench deadlock in the west. Victory can be yours in Storm of Steel.
Contents: Rules & Scenario booklet, 1,400 Die cut counters, 100 Color playing cards, 3 34” x 22” Map, 11 x 17 World Display, Assorted Player Aid Cards, 1 Die, Storage bags, 11x17x2" box.