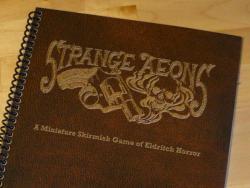 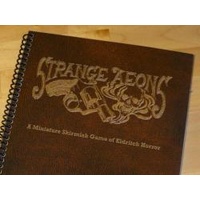 This full-colour, ghoulishly illustrated 80 page rulebook contains everything you'll need to learn the Strange Aeons system. We selected a coil binding for gaming convenience, as it allows you to leave the book open to a selected page without damaging the spine.

The history you know is only a fraction of the truth. A truth so black and frightening it was decided that for reasons of national security it should be forever hidden from the public...until now.

Months earlier, President Wilson was injured in a failed assassination attempt by members of the Cult Of The Black Goat, unscrupulous traitors who would see man's dominance over this planet overthrown by ancient and evil beings. Setting upon the President at his residence and spiriting him away to a clandestine ceremony, cultists bound and assailed him. Their intent was to offer the President as a sacrifice when they opened a gate to another reality. Fortunately for Mr. Wilson, something went wrong, leaving him the sole survivor. These events may never be known, but what is known is this:

As long as there are things lurking just beyond our reality and traitors who would seek to bring them here, we shall be there waiting at the Threshold.

–President Wilson in a secret address.

1920, November 21: Newly trained Threshold Agents are placed into society and given assignments. Protecting an unknowing humanity from forces so dark and ancient and alien that to comprehend would surely mean madness...and to fail, absolute destruction...

What happens next is uncertain...but whatever the outcome, the future lies in your hands.

The aim of a miniature skirmish game is to enact battles between two opponents on a tabletop. In the case of Strange Aeons, one player takes control of a band of heroic Threshold operatives and the other player acts as the evil Lurkers. Games of Strange Aeons are based in a roughly historical setting sometime after 1920 and can take place anywhere in the world.

Strange Aeons should be played on a level surface that measures roughly 2' x 3'. Games take an average of 45 minutes to play and are fast, dynamic and deadly.

The heroes learn new skills as they search for ancient artifacts and elusive map pieces to lead them on even greater quests. But the path is fraught with danger! Injuries, madness and death all wait to claim the careless or foolish adventurer. Over 20 different types of villainous madmen and monsters and a unique modification system ensures you never have to fight the same Lurker twice. Which is good, 'cause with 12 action-packed scenarios who knows what might happen.

Journey into fear...and beyond madness!