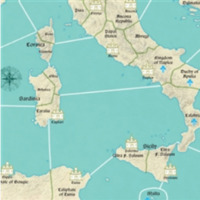 Mediterranean Empires: The Struggle for the Middle Sea, 1281-1350 AD is a low to intermediate complexity, two-player, strategic-level wargame simulating the fight for the Western and Central Mediterranean during the turn of the 13th-14th centuries.

Players control either the French/Anjou forces and their allies, or Aragon and their allies. The map shows the Western and Central Mediterranean as it was during the 13th-14th centuries and is divided into its geo-political regions or areas with units moving across the map from area to area. There are seven game turns. Each game turn (GT) represents a decade. Units represent from 500 to 2000 men.