Decades ago an apocalypse destroyed the world, wrecking its cities, ravaging the land, and devastating the population. Now, after more than a generation, a new age dawns with The Cataclysm, an expansion for Talisman Revised 4th Edition. People are returning to establish settlements, nature is evolving in bizarre, unprecedented ways, and traces of the former civilisation can be found everywhere. This is a time of chaos and possibility, of challenges and heroism.

The Cataclysm introduces a new centre board that opens up a reinvented, post-apocalyptic realm for your exploration. Those brave enough to inhabit this world are brought to life in the Denizens deck, while the Remnants deck fills spaces with lost treasures, broken artifacts, and the lingering after-effects of the apocalypse. Five more characters now seek the Crown of Command, including the Black Knight who once menaced the Middle Region, and four alternative endings shape your quests in this ever-changing world.

Some of the Characters who first sought the Crown of Command may undertake that quest again in this altered, post-apocalyptic world. Competing with them in The Cataclysm are five others who have never sought it before. Some of them have long inhabited the realm. For instance, the Black Knight has abandoned his castle in the Middle Region to claim greater power. He now rides through Talisman, forcing the other Characters he meets to give him gold or else he’ll take one of their lives. The Mutant has also lived in this realm her whole life, and also remained there through its darkest times, but she is no longer the human that she once was. Magical energies that flared and fluctuated during the apocalypse infected her body so thoroughly that her form, Strength, Craft, and fate have continually changed.

Others have no memories of what it was like before the apocalypse. The Scavenger grew up during the decades that followed and learned how to survive by staying in motion and collecting whatever Objects she could find. The most valuable ones she stashes away so that they cannot be stolen. Youngest of all is the Arcane Scion , born during the outburst of magical energies that transformed the Mutant. Unlike the Mutant, who cannot fully control her mutations, the Arcane Scion has harnessed those energies, using them to wield Magic Objects and cast Spells. 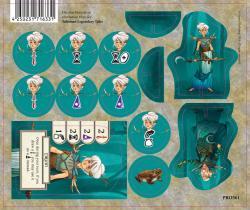