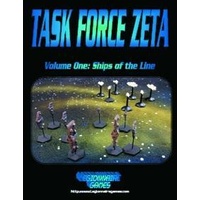 Task Force Zeta Volume One: Ships of the Line

Task Force Zeta is a game of starship combat set in any future you wish to imagine! Fight ship-on-ship duels with the enemy or engage entire fleets in battles of 50-60 ships per fleet - and finish the battle in anywhere from 30 minutes to an afternoon's gaming time.

The rulebook is divided into easy-to-learn sections and uses a form of programmed instruction, allowing players to apply newly-learned rules sections over the course of seven scenarios - begin playing the game in as little as 15 minutes!

Task Force Zeta Volume One: Ships of the Line includes:

Task Force Zeta scales combat at 1 miniature equals one ship or a squadron of fighters or shuttles.