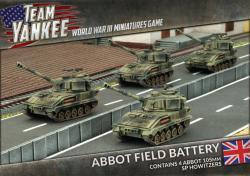 The FV433 Abbot self-propelled gun mounts a 105mm gun on a modified FV432 armoured personnel carrier chassis. Although its calibre is relatively small for a modern artillery piece, the 105mm gun fires a high-capacity shell that gives it an excellent performance.

The Abbot provides close support for the armoured brigades, where its presence is much appreciated. The guns are very effective against infantry and light armour, as well as providing smoke screens to mask the defenders from enemy fire while repositioning.