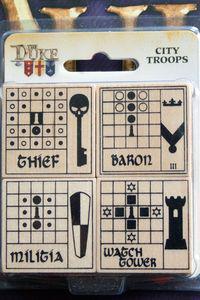 Before the start of any game players decide how they want to mix and match these troop tiles. They can choose to replace all of them, some of them, or none of them; both player's choices can be totally different. Only two rules apply:
- You cannot have both tiles in the bag. For example you either have the Thief or the Assassin, but not both.
- In instances of multiple identical tiles (such as the Footman/Militia); If you replace some of them, you must replace all of them.

NEW MOVEMENT ICONS
In additional to the specifics below, the standard rules for Movement Icons apply (see p. 3, The Duke Rules Booklet).

Non-Capture Move/Jump/Slide/Jump Slide: Non-capture Move/Jump/Slide/Jump Slide icons follow all the exact same rules as the Move, Jump, Slide and Jump Slide icons (see p. 4, The Duke Rules Booklet), with the following exception: there cannot be a tile (either friendly or enemy) in the target square or in a square the time is attempting to move through; if there is a tile , the active tile cannot be moved into that square (meaning an enemy tile cannot be captured using these icons).