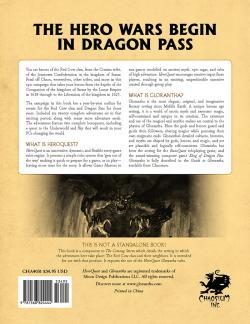 Temertain sits on the throne of the kingdom of Sartar. He is a weak puppet of the Lunar Empire; his kingdom fractures along tribal lines. Envious eyes covet your clan’s cattle; they will seize them at the first sign of weakness. Can you protect the Red Cow clan from its hostile neighbors?

The Lunars have invaded the Holy Country to the south. A demon from hell—the Crimson Bat—comes to Sartar, destined to join the Empire’s armies; it must be fed on the souls of the living. Can you shelter the Cinsina tribe from Chaos?

The Telmori have a new leader Jogar Sog, his visions of his people scattered and killed by the Great Liberator have stirred the braves to war. Normal weapons cannot harm them. Can you preserve the Jonstown Confederation from the packs of werewolves?

Tatius the Bright has killed Orlanth and Ernalda sleeps. Can you liberate the kingdom of Sartar from the Great Winter?

This product is for HeroQuest Glorantha, but can be easily adapted to RuneQuest as well.

​This product is released under the Bits and Mortar program, and a receipt from the purchase of the book can be redeemed for a free PDF copy of the book.