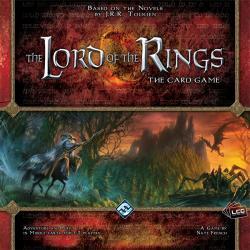 The Lord of the Rings LCG: a Journey to Rhosgobel The Lord of the Rings LCG: The Hills of Emyn Muil Lord of the Rings LCG: The Hunt for Gollum

An ancient evil stirs in the black lands of Mordor, and the people of Middle-earth speak of a terrible doom  approaching from the east. The only hope lies in a heroic few who must work together to stem the tide of evil...

Forge new legends in Middle-earth with The Lord of the Rings: The Card Game! Gather your friends and together take on the forces of shadow.

As the first cooperative Living Card Game, The Lord of the Rings puts 1-2 players (or up to four with two Core Sets!) in control of the most powerful characters and artifacts of Middle-Earth.

Following the Living Card Game format, The Lord of the Rings: The Card Game will be expanded each month with a new Adventure Pack adding more cards to the player and encounter decks. In addition to these cards, the monthly packs will include a new quest for the players to compete against. Each six-pack cycle will convey one unified narrative, tying the quests in that series together, immersing you in the setting.

The Lord of the Rings: The Card Game is a one or two player (or up to four when combining two core sets)  cooperative game in which players work together, competing against quests controlled by the game. Players can join forces with their friends, building decks that complement those of their teammates. The game’s ingenious mechanics deliver a unique set of challenges every time, offering nearly infinite replayability.