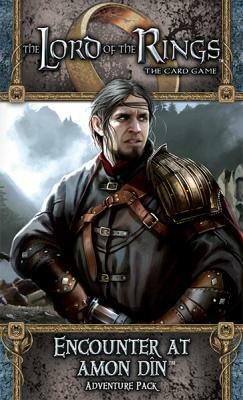 The Lord of the Rings LCG: Encounter at Amon Din

The third Adventure Pack in the Against the Shadow cycle for The Lord of the Rings: The Card Game.

Emerging from the Drúadan Forest, the heroes seek to return to Minas Tirith, but dark plumes of smoke rise across the lands of Anórien. Amon Dîn is burning, and it falls to your heroes to save the village’s citizens from the spreading fires and the threat of an Orcish siege! In Encounter at Amon Dîn, players control Middle-earth’s greatest heroes during a dramatic rescue mission.