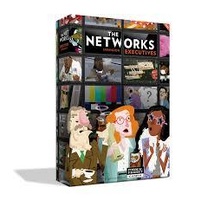 The Networks: On the Air Expansion So you`ve proven your worthin the past. We know you can run an ordinary TV network. Big deal. We have a bigger challengefor you. Here are 12 unique Network Executives, each with their own weird characteristics. Every Executive has powers, but they also have significant liabilities. Can you master each executive's idiosyncrasies, draft the best Season 0 cards, claim your true status as a Mogul, and come out on top?

The Networks: Executives, a full expansion for The Networks, changes the gameplay in a few ways.

Second, there is a new deck of Show Cards with a different mix of Genres. Each Genre now has an equal chance of appearing, unlike in the base game where Reality and Sports shows were less common. However, Sports Shows now have a higher upkeep, and Reality Shows don't get you as many Viewers on average as another Show with a bunch of Stars.

Third, players no longer automatically get starting Public Access Shows, Stars, or Ads. Instead there is a starting "Pilot Season" draft in which players pick their starting TV shows. These starting Shows determine a player's starting resources, like Stars, Ads, and extra money.