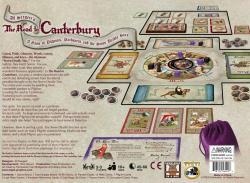 The Road To Canterbury

For the faithful, they instill horror. For you, on the other hand, they present a wonderful business opportunity!
In The Road to Canterbury, each player is “the Pardoner,” traveling with seven of Chaucer’s pilgrims from London to Canterbury. Each Pilgrim is afflicted with one of the seven deadly sins, thus having need of your indulgences. Using relic, sin and pardon cards, each Pardoner tries to “save” the pilgrims from their sins and the eternal consequences.

For you to succeed as a pardoner, you’ll need to do more than just sell forged pardons for quick cash. To keep your services in demand, you will actually need to lead these Pilgrims into temptation yourself! Perhaps some phony relics might help? There is also one big catch. The Seven Deadly Sins live up to their name: each sin that a Pilgrim commits brings Death one step nearer, and a dead Pilgrim pays no pardoners!

So much to forgive, so little time…
Will you be able to outwit your opponents?