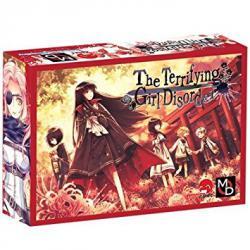 The Terrifying Girl Disorder is a quirky and brain-burning set-collecting card game. The deck consists of seven different types of cards, with each type represented by a girl with numbers 1–7 and a special power. Players start with a hand of cards, and each round play any number of identical cards from hand, activate that girl's special power, then collect new cards, using a weird drafting mechanism.

Each player can play a certain numbered set only once per game. When the game ends, the player who has played the most cards of a certain girl "becomes" that girl. Each different girl has a completely different way of scoring, so you need to adapt to the other player's play rapidly.

(The title is an allusion to a novel set in a distant future in which girls around the world start manifesting supernatural powers, and they are more or less treated as threats to humanity.)