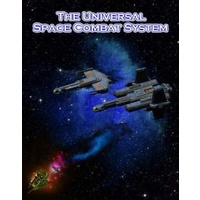 Two hundred years ago, the battles above the home world took place with rail guns and guided missiles. Then came particle accelerators and meson cannons, eventually becoming weapons with inhumanly cruel purposes with names based on the damage they dealt to others. Force shields replaced armor replaced sand casters, but in all cases the aftermath left behind vast reaches of empty space, glittering here and there with the charred remnants of warships long forgotten by the time the next generation’s armadas gathered for another round.

The Universal Space Combat System is a simple, fast-paced science fiction miniatures-based futuristic space combat system that can be used with genres heavily based on science or heavily based on fiction, and throughout a wide variety of technology levels. It can stand alone as its own skirmish or massive fleet game, or be integrated into just about any existing science fiction Role-Playing-Game.

This game splits up portions of the rules into both a SCIENCE fiction (SCIfi) setting, or a science FICTION (sciFI) setting Essentially, space fights that look cool, or space fights that are based more on realism, with the ability for players to mix and match aspects of each as they see fit. It allows for space combat in worlds where ships tow each other by grappling hooks or by tractor beams, where space marines board by teleporting onto the other ship or by laser-cutting open holes in the hull, and where faster-than-light travel happens by a single instantaneous jump, or by traveling days in a warp bubble that allows ships to chase and fight each other while racing at speeds beyond comprehension.