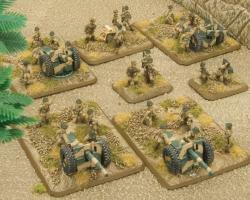 Despite its age the 75mm mle 1897, known to the French as the Soixante Quinze, or ‘Seventy Five’, remains a revolutionary weapon. More than 40 years after its introduction it is still a devastating weapon, particularly when used against infantry in the open. 4,500 of the guns form the core of the French artillery arm.