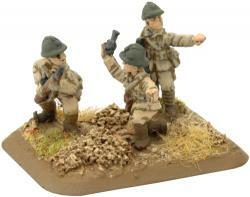 With the mortar platoon, the machine-gun platoons of each battalion’s fourth company provide close support to the Infantry, Vichy or Gaullist.

The Tirailleurs Machine-gun Platoon is armed with the ever sturdy and reliable 8mm Hotchkiss mle 1914, the standard heavy machine-gun of the French Army since World War One. Capable of firing up to 500 rounds per minute, the weapon could be feed by either a 24 round strip or via a 250 round articulated metal belt.

Doctrine teaches us that using these guns in defence will see off enemy attacks, but they are also a critical component for an attack.

The Tirailleurs Command Rifle Team in Flames Of War