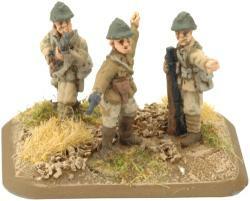 The state of the French troops in the Vichy Levant (the collective term given to French Syria and Lebanon) was not too dissimilar to mainland France. While the majority of troops was made up of locally raised Levantine conscripts, the Army of the Levant was stiffened with several well trained regiments of Moroccan, Senegalese, and Algerian troops.

Their premier troops, of course, were the three Legion battalions of the 6e Regiment de Légion Étrangère.

The Legion also provided the backbone of the invading Free French troops. The 13e Demi-Brigade de Légion Étrangère has served with the Free French since declaring loyalty to de Gaulle after the fall of France. The bulk of the Gaullist forces are also made up of native colonial troops many of whom joined after the earlier campaigns in Dakar, Gabon, and Eritrea.

The Command Rifle/MG Team in Flames Of War

The VB Team in Flames Of War

The Tirailleurs Squads Teams in Flames Of War