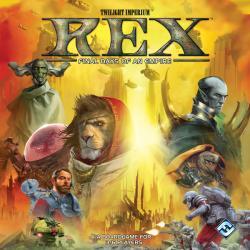 The final days of the Lazax Empire began with the attack on Mecatol Rex in the seventy-third year of the Twilight Wars. This is the story of that attack.

Rex is a board game of negotiation, betrayal, and warfare in which three to six players take control of great interstellar civilizations, competing for dominance of the galaxy’s capital city. Set 3,000 years before the events of Twilight Imperium, Rex tells the story of the last days of the Lazax Empire, while presenting players with compelling asymmetrical racial abilities and a myriad of opportunities for diplomacy and deception. Based on game rules originally designed by Bill Eberle, Jack Kittredge, and Peter Olotka, Rex was developed for a new audience through the collaborative efforts of Christian T. Petersen and Corey Konieczka.