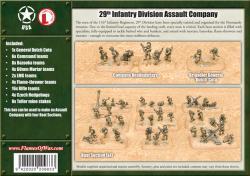 The men of the 1st & 29th Infantry Divisions are specifically trained, organised and equipped for the Normandy invasion. With mortars, bazookas, flame-throwers and explosives, these men are ready to tackle any threat.

Careful study of the defences along the coast showed them there were weaknesses inherent in its structure, and, if the men had the right equipment and training, exploiting those weaknesses was possible. Any invading force would have to overcome wire, minefields, and bunkers if it was to be successful. Thus the planners set about to create the perfect mix of men, equipment and training.